Conflict That Spills Over into Your Workplace

Is conflict a problem in your workplace? Maybe not all the time but much of it? If so, I’ll bet that situation has intensified since the onset of this year’s extremely acrimonious presidential election campaign. I’ve written about conflict in the work environment before, but this year things seem to have escalated. [No, this is not going to be primarily  about politics!]

Some topics appear to aggravate even normally non-aggressive people–religion, politics, racial discrimination, etc. When issues such as those intrude noticeably on your work environment, the results can be hugely disruptive, and they can go deeper and last longer than you might think.

Minimizing Outside Conflict Spillover in Your Workplace

What can you do to minimize conflict spillover? If you’re in a leadership role, you have opportunities–and almost a mandate–to exert a positive influence on the situation. Obviously, you can’t completely eliminate the issue without resorting to extreme measures that would potentially land you in hot water–either with your senior management or with the government, or both. However, you can’t afford to ignore it, either. 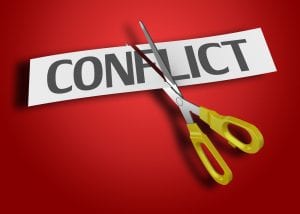 During this election period, for instance, you can initiate communications with your team that help them reaffirm the importance of putting work first and maintaining a respectful approach to their interactions with each other. As long as their discussions don’t impinge on the work they’re being paid to do and don’t disrupt operation of the company (or group they’re in), you stand a good chance of keeping the situation basically under control.

One article I just read that relates to this aspect of the situation is “Election campaign sparks more chatter, anger in workplaces.” In it, the author notes, “The contentiousness of this presidential campaign is spilling into some workplaces…Employment lawyers and human resources providers say they’re getting more calls seeking advice, and suggest bosses tread carefully. Rather than try to control what people are saying, owners should focus on whether the work is getting done in an atmosphere that isn’t hostile.”

Whether or not you actually hold an “official” leadership position in your organization, you might want to make an effort to smooth out conflict situations that arise. The cautionary note here is to think before you act so you avoid overstepping your bounds and triggering a negative reaction from people above you on the management chain.

That said, it’s a good idea to concentrate on what you can do that will promote a workplace atmosphere of inclusion rather than divisiveness. For example, can you spark conversations that focus people’s attention on common goals, views, etc., rather than on their differences of opinion? The concept of civil discourse doesn’t seem to hold the importance to many people today that it used to, but it’s not a bad place to start. 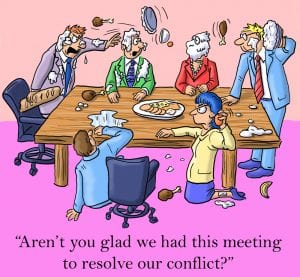 Encouraging people to look for areas of agreement rather than points they clearly don’t agree on helps direct the activity toward inclusiveness. Leadership that results in the opposite outcome–more and stronger disagreement, battleground atmosphere, and so on–isn’t true leadership. It’s clearly divisive rather than inclusive.

Divisiveness sucks energy from your team and from you. It keeps all of you from focusing on the critical work you should be–and need to be–doing. It’s probably unrealistic to expect everyone to agree on everything all the time. That doesn’t even happen in fairy tales! What isn’t unrealistic is to recognize the value of reducing workplace conflict as much as possible and execute actions designed to achieve that, so the conflict isn’t disruptive to the work the organization should be focused on.

← Do You Have a Great Boss? Are YOU One?
Are You Ready for Big Changes–Work and Life? →