Retirement or Second Career – What’s Right for You?

Whether you’re 30 or 50 (or more), retirement will probably pop up on your radar screen eventually. You might not think it’s an urgent topic if you’re still in your 30s, but don’t rush to that judgment too hastily. Giving early thought to retirement planning can put you a giant leap ahead when the time does come.

In any case, it’s a decision that could smack you in the face if you haven’t given it some serious thought ahead of time. For starters, I have some questions you might want to ask yourself.

Retirement Questions – To Do or Not to Do

Before you get too far into the subject of retirement, start by asking yourself:

In short, what does retirement mean to you, can you do it, and do you want to? Does the idea of lying on a beach in a tropical paradise or riding the canals of Venice in a gondola draw you strongly? Maybe it’s something else that pulls you toward retirement.

Whatever it is, give it some practical thought before you make the leap. We know that people are generally living longer these days and often (though certainly not always) in better health than used to be the case at retirement age. That can offer previously unavailable post-retirement opportunities and also some challenges.

I’ll share my brief take on this situation: I’ve been involved in resume writing  and job search coaching for 20+ years (and added LinkedIn profile development several years ago). It’s been rewarding but hasn’t made me independently wealthy, so if I decided to retire, my life-scale would be sustainable but modest. However, accumulating retirement income is not what keeps me going in my business.

What gets me up and working each day? I love what I do and the people I get to work with! Other than maybe taking an occasional trip or something like that, which I can do anyway, I can’t think of a good reason not to continue with my business for as long as I’m physically and mentally fit to do so. 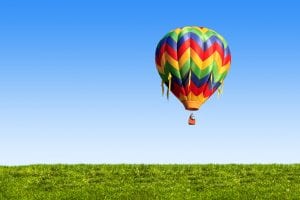 For me, this is as good as it gets. It brings me the same sense of enjoyment and satisfaction as a hot-air balloon enthusiast might get from flying high above the earth and looking down at the view. It’s my second career–being an entrepreneur was not my first choice, at the beginning.

Retirement vs. an Encore Career

You might have heard the phrase “encore career” instead of “second career.” They essentially mean the same thing. At some point in your life, you could decide the next step isn’t retirement but a jump into something quite different, maybe a venture you’ve always wanted to try but couldn’t find a way to fit into your full-time working life. Or maybe you’ve had a particular cause that you wanted to be a contributor to in some way.

Whatever the focus, you might find that concentrating on it will turn out to be more rewarding than straight retirement. Some people can actually “hit it big” in their encore career, but most of us find that it’s satisfying in other ways than just the money.

In a recent article published in the AARP Bulletin (Jan.-Feb. 2018), titled “Great Second Careers: How They Did It–How You Can Too,” you can get a fascinating glimpse into the stories of 16 people who took the second-career plunge and are finding real fulfillment in their choices.

The article quotes a study that “40 percent of people working at age 62 had changed careers since they turned 55.” Maybe one of them could be you!

← Is Your Career Ready for a Change? Are You?
Are You a High-Engagement/High-Burnout-Risk Employee? →